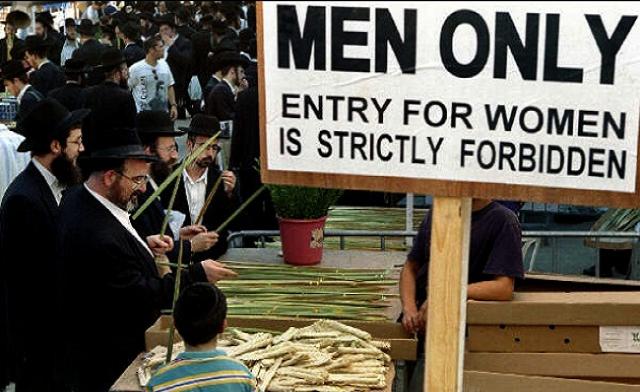 I wish I could explain to these men (and their wives) what is wrong with this picture. But then, if they had the mental capacity to understand it, I wouldn’t need to, would I?

Perhaps mental capacity is wrong. They do have it. It is just walled around by years and years of racial, religious and personal family hands-on, brainwashing.

I heard the Jewish Morning Prayer on the few occasions that I went to a synagogue in the morning. I also read a lot about it, especially from learned Rabbis who were trying to explain it and shine a positive light on the intent of it. I only truly understood it tor the first time when I went to use the men’s room at a large concert (I think it was that nice Jewish boy Zimmerman, in Boston.) If I had to stand in the women’s line I would have probably missed part of the concert.

O.K. just trying to see if you’re paying attention. Here are some true facts about women in Ultra-Judaism:

There are other discriminatory practices against women, but just as with the men, very few of them find the wisdom and courage to leave their Orthodox communities.

One last note: I couldn’t find many pictures of Orthodox women on the web. A few that I found actually were of women wearing some kind of burka, which I do not know anything about and I do not feel the urge to research currently. Hilariously, I found the picture that I am using on the Al Arabiya site. Al Arabiya is a  Saudi owned and operated TV station.

This is a growing portion of the population in the great “DEMOCRACY” of the state of Israel. And as if that was not enough, they carried that oppressive doctrine into every other democratic country that they moved into, like France, Italy, The United States. It is hard to understand why a lot of people are opposed to sharia laws but ignore the equally antiquated and un-democratic orthodox Talmudic ones.