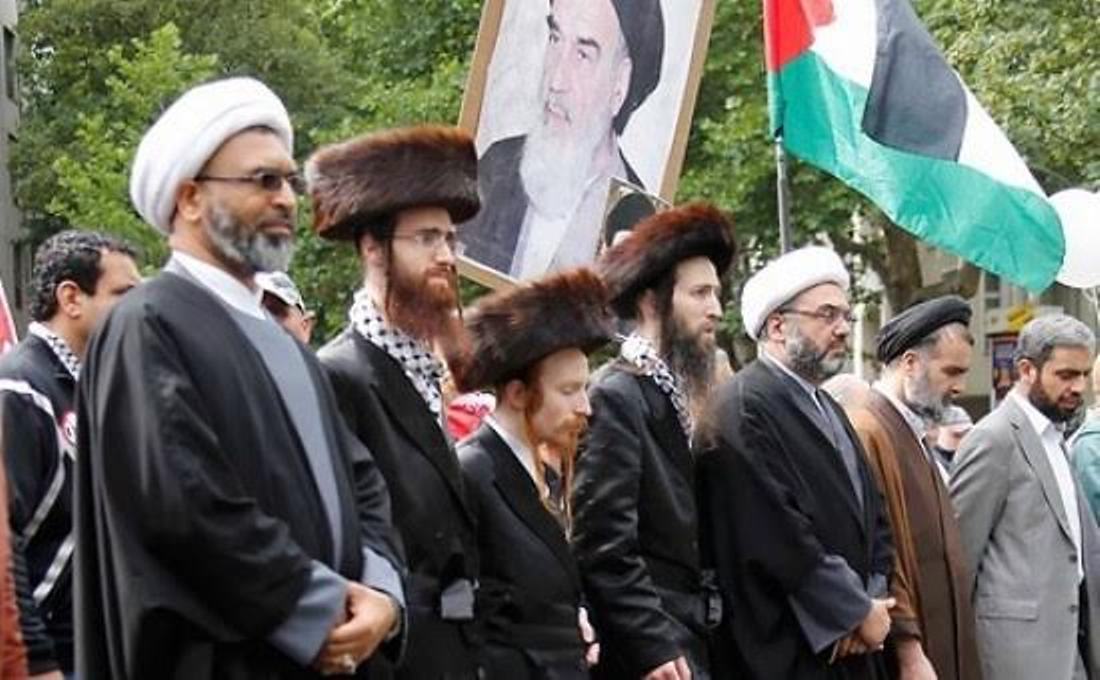 I wish I could explain to these men (and their governments) what is wrong with this picture. But then, if they had the mental capacity to understand it, I wouldn’t need to, would I?

I would like to make one last point before I move on to other topics. I love the land of Israel and a lot of its people. There are some however that I have no love for at all. I wouldn’t say that I hate them – that would be a waste of emotion. What I feel about them is mostly sadness and pity. I will not talk about some of the elements in this picture other than to say it was taken at an annual protest against Israel held in Berlin. The people in the picture about whom I will talk are the ones with the expensive fur hats. The hats are usually made of 13, 18 or 26 different furs that come from sable, mink, marten and/or gray foxes and cost somewhere in the vicinity of $5,000. The people who wear them probably have no idea that they are wearing hats that have very likely originated with the Tatars, just as they may have no idea that their fancy garb is an imitation of 17th century Polish nobility dress. In principle, these guys are very likely to be major Talmud scholars, but in as far as the rest of human knowledge, they are true morons. I am not talking only about these three specifically – my statement is general and it applies to most orthodox Jews. I see some of them outside the B&H store (owned and managed by orthodox Jews) in Manhattan. I do not go and question which sect they actually belong to, so they may not belong in the same class as the ones in this picture. The ones I see outside that store, are smoking a cigarette a lot of times. I have also noticed  some Jews wearing orthodox seeming garb, head gear etc., gambling and whoring. Anyway, these three guys belong to a sect called Neturei Karta (guardians of the city in Babylonia Aramaic.) Their sect is opposed to the existence of the state of Israel and the ones who do live in Israel do not speak Hebrew and I believe that they do not even have Israeli passports.

I arrived in the land of Israel in May of 1961 with my parents. A chance encounter on the street while walking in Haifa with my father made such a strong impression that I remember it still. It was not too long after we had arrived from Romania where I was born. My father used to be a member of the Communist party in the old country. Much to my surprise, he had joined MAPA”I (acronym for Party of Laborers of The Land of Israel) though there were two Communist parties in Israel at the time. When I asked him, he explained that he didn’t care that much for politics – he just wanted to be allied with the ruling party. Anyway, on this day we ran into a former comrade of my dad’s. This guy used to be a higher muck-a-muck in the Romanian Communist party. On this day, he was wearing the garb of an orthodox Jew and had all the customary facial hair ornamentation. After a short greeting, my dada asked the dude:

“It’s a parnusseh (living,)” was the answer.

Yep, that’s the rub. Somehow there is money in wearing those clothes and switching your belief to whatever they support. Obviously, someone out there, probably in the United States, as well as parts of Europe, is financing all of that crapola. And how is this for a bonus: A lot of the less extremist Jews in Israel are also benefitting from the defense of the IDF which is populated almost entirely by non-religious or I should say less religious Jews. The majority of non-religious Jews in Israel will very likely go to a synagogue on the high holidays (Yom Kippur and Rosh Hashanah.)  The religious Jews have somehow managed to strong arm the government into exempting them from the otherwise compulsory (for men and women) military service.