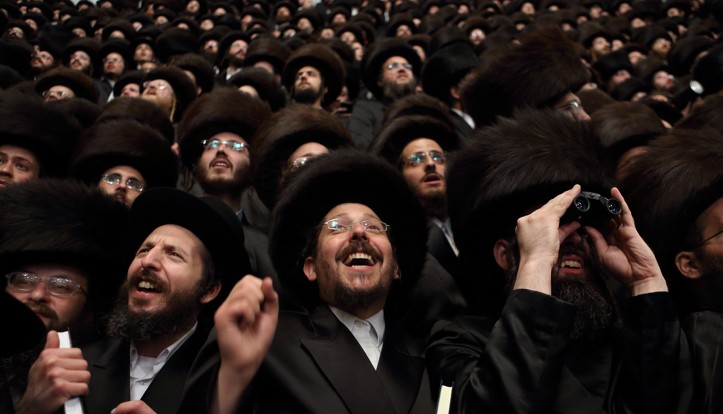 I wish I could explain to these men what is wrong with this picture. But then, if they had the mental capacity to understand it, I wouldn’t need to, would I?

Perhaps mental capacity is wrong. They do have it. It is just walled around by years and years of racial, religious and personal family hands-on, brainwashing. I have lived in Israel for fourteen years. At the time I was living in Haifa which was populated mostly by non-religious Jews. The one courtesy that the city extended to the Ortho-Jews was closing part of one of the main streets on the Sabbath. It was a section passing in front of the Great Synagogue. On the other hand, the study of the Bible was compulsory in public schools. One of the reasons I ended up in a vocational High School – they didn’t harp on that Bible too much and considering that in every other subject I was the number one pupil in school, I ended up with a decent mark that didn’t lower my average by too much so I ended up at number one anyway.

At the time there was a campaign that was proclaiming high and low how State and Religion are separate and will stay that way. I eventually found out that was a crock of shit. My friend Cuba graduated from the Technion with an architectural degree. He served in the IDF and by the time he was discharged, he was a Captain in the Engineering Corps. He found a girl, they fell in love and on trying to get married, he was told that since his mother was Catholic, he would have to convert to Judaism in order to get married. See, here’s the number ONE lie: State and Religion are not really that separated. Up to this day, some 45 years later, there is no civil marriage in Israel. The only option my friend and his future wife had was to get married in a different country. A lot of couples used to fly to Cyprus for that reason, but sometime in the 70’s the Israeli Rabbinate managed to find a loophole that did not allow that anymore. Cuba and his wife managed to find a way to get married by proxy in Mexico.

Now, Israel keeps trumpeting high and low about how they are the keepers and defenders of Democracy in the Middle East. Come-on, even Turkey has a civil marriage procedure in place. Looking through the web I actually found out that Pakistan, largely thought of as the cradle of terrorism, does not accept religious wedding ceremonies. The only acceptable knot tied in Pakistan, is a civil one, stamped and approved by a government official.