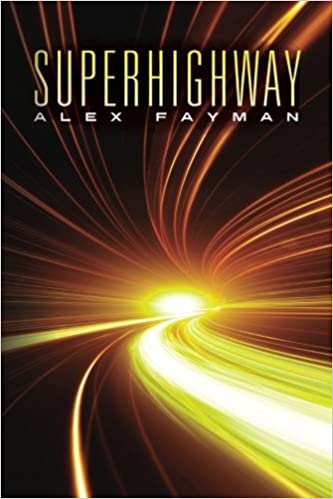 Alex Fayman approached me on Facebook and asked if I could review his book Superhighway. I have a seriously crammed schedule especially with the National Novel Writing Month starting tomorrow. Even as I write this, I still need to tie up a few loose ends, but I still love to read and have managed to shove this one in between some of my other chores. I have to say, that I am not sorry. I enjoyed it very much and it was a fast and easy read without ever becoming juvenile. By that I mean, it did not use any bombastic English words that might necessitate a dictionary, but it was also not written for a 3rd grader. I have been reading Fantasy and Science Fiction in three different languages since I was about six years old and I have a feeling that Alex has been reading a lot of it as well. Though he has been living in the United States for a large part of his, life I would like to propose that his first novel sets him on a path that has been followed by other great Russian writers, such as Alexander Belayev and Alexei N. Tolstoy. Like them he takes today’s science and extrapolating from it comes up with a fantastic sounding but not necessarily unscientific premise. Growing up in the U.S. in the later part of the 20th century and the beginning of the 21st has also exposed him to a slew of super heroes so it is not surprising that his protagonist is tailored along some of those lines. However, this is not a Marvel or DC Comics kind of super hero. He does not seem to have all the compulsions of those antiquated fellows about obeying the law.

Superhighway is a story about a young man who is discovering that he has the power to do something that he didn’t even dream was possible. There is no one to guide or train him in the correct use of these powers and he has to stumble along the way and try to figure it out all by himself. Besides the mistakes that he makes while using his newly found powers, he also seems to get high on that premise and he makes some elementary mistakes in his romantic and social encounters. He is however very charismatic and it is easy to forgive him and wait and hope that others will do so as well.

Bottom line: this is a very gripping tale that flows smoothly and makes you want to keep reading to find out what is awaiting the hero around the next bend so to speak. It leaves you wishing that the second part of this trilogy was available right now, but we all have to wait. Mr. Fayman is hard at work on part 2 and it should be available in a couple of months. The kindle version of Superhighway can be found at Amazon.com.