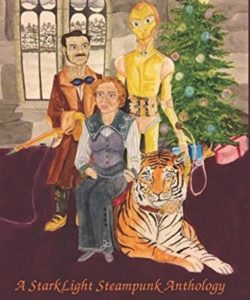 Ernie had sent me a copy and asked me to review it when I got a chance. One of his stories had won a contest of some sort and was published in it. StarkLight Press is a small but up and coming Canadian publishing house. It was started and is owned and managed by Tony Stark. Tony and his wife Virginia Carraway Stark have also contributed two excellent pieces to this Anthology.

Having previously read Ernest Samuel Llime’s novel Do, Re, Mi and the Big C as well as his collection of erotic shorts A Closer Look, I expected his story to be some kind of smutty invention. I checked the table of contents and strangely, his name was printed in bold characters, unlike the other authors’ which were all in Italics. Later on, I mentioned that to Ernie and he said that he had contacted the publishers and they will correct that. StarkLight Press invites authors to write on some pre-defined topic or other and the best stories get published. For this one they requested Christmas stories in a Steampunk setting.

I first turned to page 171 and read his story: Chinese Christmas. Surprisingly, it was about a little Chinese girl in an alternate Detroit City. There were absolutely no sexual connotations whatsoever. I am not going to spoil the story by giving away any other details. I will just say that it created an O’Henry kind of atmosphere and it was very well written.

The rest of the stories were all set in some kind of Steampunk reality and made for a solid and very inventive read. As I had stated previously, Virginia Carraway and Tony Stark made their customary appearance turning in two very fascinating inventions. The rest of the stories were equally exciting. One story that stood out was The Tree by Will Norton. It was more like a story that I would have expected Ernie to write, though in some ways it reminded me of Clive Barker, which is not a bad thing at all.

In summary, I highly recommend A StarkLight Steampunk Anthology. It is a well-chosen collection, a fast read and a real page-turner. Congratulations to StarkLight Press for putting together a well assembled collection..

P.S. – I went to Ernie’s author page at Amazon and found two other StarkLight Press Anthologies. I will get to those eventually.