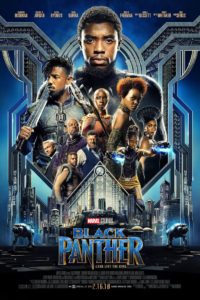 I went to a movie theater to see this one. The teaser or trailer as they sometimes call it had Gil-Scott Heron’s The Revolution Will Not Be Televised in it. I did not know anything about the comic and I was wondering if it had anything to do with the American Black Panther Party of the 1960’s and 70’s. My daughter told me that it was very much influenced by it. I was excited and I could hardly wait for it to hit the theaters. I was captivated by the concept from get go – great idea, great CGI’s or whatever they call them and some good action. Not so good that the guy who wanted to help the world got killed and his son became the villain. Anyway, I kept waiting for the dramatic moment when Gil-Scott Heron’s amazingly distinctive voice will intone those magic words: The Revolution Will Not Be Televised. I thought the point where the main guy, The Black Panther gets thrown off the cliff was building up to it. Everyone suspected that he was not dead, but I knew he wasn’t. I knew that he was going to come back and reclaim his throne, confront his ancestors and do the right thing while Gil-Scott Heron would recite his lines loudly. Imagine my disappointment when the movie ended and Gil-Scott Heron was not even heard over the credits. I guess I did not learn my lesson from Iron Man. That teaser featured Ozzy Osbourne singing Iron Man, but the movie did not have that song in it. It was so ridiculous when Tony Stark first came out as Iron Man and the most iconically possible song was nowhere to be heard.

I am an immigrant, so I do not truly understand the plight of the black man, or woman, but I got the message. I live in the land of lies. No one believes that something can be really and truly good, so they need to lie about it. I mean, isn’t a movie trailer supposed to show things from the movie that will make you want to go see it? In both cases, I mean Iron Man and Black Panther, I went to the movie theater to see how the song (Iron Man and The Revolution Will Not Be Televised was used). I think that what they did was false advertising and I wish I had some money so that I could sue the shit out of Disney and everyone else involved.

I will not elaborate on the lies that are perpetrated on us day by day. Let me just give one small example: Lately, Coca-Cola is advertising their zero sugar drink. If you know that it’s been more than 50 years since there was any real sugar in American Coca-Cola, raise your hand. If on the other hand you think that high fructose corn syrup is the same as sugar, take some money out of the bank and go straight to Disney World, Disney Land or some other Utopian world. I mean Disney Studios have been raping my childhood fairy tales for such a long time that I am almost used to it. Having them fuck with my music is just the last straw. Gil-Scott Heron must be spinning around in his grave. If he could communicate he would probably ask:
“What is wrong with you all? Didn’t you hear a word I said?”

Bottom line: was the movie good?
I think maybe, but I was too distracted waiting for my tune, to form a better opinion.

This entry was posted in Movies. Bookmark the permalink.