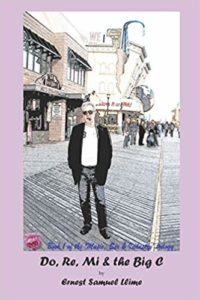 Do, Re, Mi and the Big C sounds so much like a story about music. Well, it is not. It’s just that Mr. Llime has decided to use these names for his principal characters. Doreen, Remo, Michelle and Solomon are all members of The New Coney Island Vaudeville Show (TNCIVS.) Other than Michelle, the other three have acquired new names at some point or another, mostly to cover their tracks. There are some musical similes, allusions and confusions. e.g.: Solomon is nicknamed the Big C and he is also known as Sol. ‘C’ in Western musical notation stand for the note ‘Do’ and as a letter in the Cyrillic alphabet, it is pronounced ‘S’ thus standing for Solomon (Соломон) as well. In addition to all that the Big C is also a name used by people who do not wish to to use the word ‘cancer.’

The main story involves Solomon’s alternative cancer cures, and his struggle against an establishment that is trying to make him and his methods go away, though Mr. Llime takes his sweet time before getting to the main topic. Most of the first part of the novel is dedicated to the creation of his main characters and their mesmerizing side show. To use a musical analogy, I would say that he is applying Ornette Coleman’s harmolodic theories to literature. He manages to create a coterie of weird but lovable creatures who live outside conventional morality. There are dwarves, midgets, a giantess, a bearded lady, a human seal and a woman who feels no pain amongst others. The backgrounds, as diverse as upper class Connecticut old money, Marseille bordellos, the Israeli Defense Force, The Soviet Academy of Medical Sciences and a Siberian Gulag, are very well constructed. The protagonists are coming from places as diverse as Ethiopia, USSR, Romania, Israel, India and Greece, China and Lebanon, as well as various states of the American Union. They all meet at the TNCIVS where they put on a great show, when they are not too busy having sex with each other. The two nastiest characters both come from Germany and in an interesting twist they end up on different sides of the conflict.

I could go on and on, but a review should not divulge all the intricacies of a novel’s plot, so I will just end it with this summation: “Well done Mr. Llime; I’m looking forward to the sequel that you’ve promised.”