The Lions, The Churchills & some Chocolate 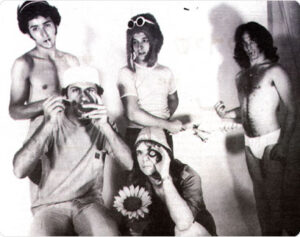 I have lived in Israel for 14 years (1961-1975.) Still have some ties to that country. Enough introductions – let me get to the actual subject: Israeli pop/rock music & me.

The sixties (that’s when I got there at the age of 14) were a musically enlightening period in my life. I did not care very much for the early 60’s Israeli music scene; it was mostly Russian & Middle-Easter influenced folk. In retrospect I realize that some of it was quite good and I do listen to that sometimes, however, what was getting my blood to flow faster was Rock’n’Roll. Elvis was O.K. but my favorite singer was Cliff Richard. In those days he was just a punk and his repertoire included every rocking style you could imagine. I do not think anyone dreamed that he would one day be knighted. His voice would be velvety and extremely seductive one moment and screeching like an animal or Little Richard the next. I did get to see him once and was not disappointed. It was a highlight of my teenage years – amazing that they granted the guy a visa – the Ministry of Education later on managed to prevail upon other governmental offices and deny the Beatles that same privilege. In the late 60’s & early 70’s things improved a bit and I did get to see some more foreign bands the greatest of which was by far “Mungo Jerry.”

As for the local rock scene in the mid-sixties, the local bands that I remember most were “The Sing-Sing”, ‘The Cocktails: and “The Blue Stars” – they were quite interesting and while The Sing-Sing covered just about everything, The Cocktails were a mixed band that included some African singers that were covering a lot of R&B sides. They were actually quite fascinating when they went into some tribal war dancing. Also one of their lead singers was the first person I have ever seen with dyed blond hair The Blue Stars specialized in surf music which was quite a novelty for me at the time.

During ’67 & ’68 I was stationed in a town named Rosh Pina which was only about 20 miles from Tiberias which is a very happening city on the shores of the sea of Galilee. Most club/restaurants would book a band for the weekend and you could have a bite and a drink in between the dancing that was done in your bathing suit of course. When .you got too hot you could just jump into the sea to cool off. So that is where I became more aware of the booming local music scene. Bands like “The Spiders”, “Uzi & the Styles”, “The Chocolate” and “The Lions” played in those clubs at the time. I and a few of my mates would sneak off to catch a band whenever we thought we could get away with it.  Some of them got busted one day when they “borrowed” the base ambulance to drive to town. Luckily, being on furlough that day, I missed that one.

Anyway, trying to research that scene proves difficult; I do not possess a Hebrew keyboard and the English sites are missing a lot of the info I am looking for. For instance, I liked “The Chocolate”  but all I remember now is that they did a really great cover of “The Tremeloes – Suddenly You Love me” – I also remember that Tzvika Pick & Shuki Levy were in that band. Surprisingly I haven’t found any mention of that even though Tzvika Pick eventually became a major pop star and composer  in Israel & Europe (he wrote the Israeli Eurovision winner for Diva International) & Shuki Levy turned into a major Hollywood composer and movie producer (Power Rangers and many others.)

The Lions were playing that scene way too many times for my taste – they sounded like a watered-down version of the Beach Boys (I was never a fan.) O.K. their sound was really good for an Israeli band of the time. I do however curse the day they broke up – it was a day of mourning for Israeli music, because their bass player and vocalist Dany Shushan joined the greatest of all bands “The Churchills” and single-handedly managed to destroy them. The sad story continues till today, because once in a while “The Churchills” do re-union concerts and he’s always there. The Churchills were by far the greatest thing that ever happened to Israeli music! By that I mean the ’68-’69 Churchill’s band:

You can find more info about them on wikipedia and other sites so I am not going to dwell on that. I just want to say that the first time I heard them cover “You Keep Me Hanging On” (I hadn’t at the time heard the “Vanilla Fudge” version) I was hooked. I probably went to more than 20 of their shows and I would never budge from the speakers. Until today, I think that Stan Solomon was the greatest and most soulful singer I have ever experienced in a live setting. In 1969 he decided for personal reasons to leave the band and on a very, very sad day the remaining members replaced him with Dany Shushan. One of the greatest disappointments in my life was seeing the Churchills at the first Israeli Rock Concert (I think it was 1970) allow this guy to butcher songs like “Living, Loving” & “She’s a Woman” – the rest of the boys proved over and over again that they still had the chops whether it was playing with Shalom Chanoch, Arik Einsteinn or any of their other numerous projects. To give you an idea of how they sounded in 1969 here’s a link to their debut LP:

that LP that I once bought and returned because of its poor manufacturing quality, is nowadays one of the rarest of psychedelic artifacts being valued at more than of $6,000 US.

… and here are a few of their singles:

For comparison, here are The Chocolate & the Lions together singing Mary-Anne in Hebrew (probably an original)

This entry was posted in Music and tagged Israeli pop/rock, psychedelic rare. Bookmark the permalink.